Hailing from the great Northwest Cody destroys transition with an unparalleled technical assault. Check out what one afternoon at the skatepark looks like and see for yourself. - Nate Alton, Thunder Team Manager

What's up Cody? Let's get the basics covered, how old are you, and where are you living these days?

I'm 28 years old, and I currently live in Portland, Oregon.

Besides the solid skate scene and all the amazing parks in the Portland area, what's your favorite part of living there?

My favorite part about living in Portland consists of many things. The people, the great food, the laid back mellow vibe, epic nature adventures, and dog-friendly everything!

A lot of people might not know you build skateparks when you're not skating, how'd you get into that and how long have you been doing it for?

I have been working with Dreamland Skateparks since I was 18, so ten years now. Dreamland actually built my hometown skatepark in Klamath Falls around 2003. While they were building it, I would ride my bike out to the job site every day after school and scope out the progress! I was absolutely blown away at the level of skill and creativity these guys had, and I said to myself. "I have to be a part of this someday!" Fast forward ten years, and I had become good friends with Mark Scott, the owner of Dreamland, by frequently skating burnside together. He called me up one day and asked if I wanted to help him work on a park in Haley, Idaho. And the rest is history.

You recently went to Estonia how was that? How is skating over there?

Estonia was rad! I went over there for this contest called Simple Session. It was their 20 year anniversary. They had all these massive ramps that were BMX style. It was insane. The skate scene is still relatively small but strong! It's rad to see that they can put on such a big event like that! I hope to go back next year.

Between building parks and skating you travel a lot, what's your favorite place you've been?

I think my favorite place that I have been so far would have to be CHRISTIANIA Copenhagen, Denmark.

You've been on Thunder for a long time how did you originally get involved?

It's crazy, out of all my sponsors, I have skated for Thunder the longest! Next year will be ten fucking years! So hyped and unbelievably thankful for a decade of support! I originally got on thunder by posting a YouTube video of me testing out some new trucks at burnside, that they sent out to people who signed up and wanted to be sent a free set to test! 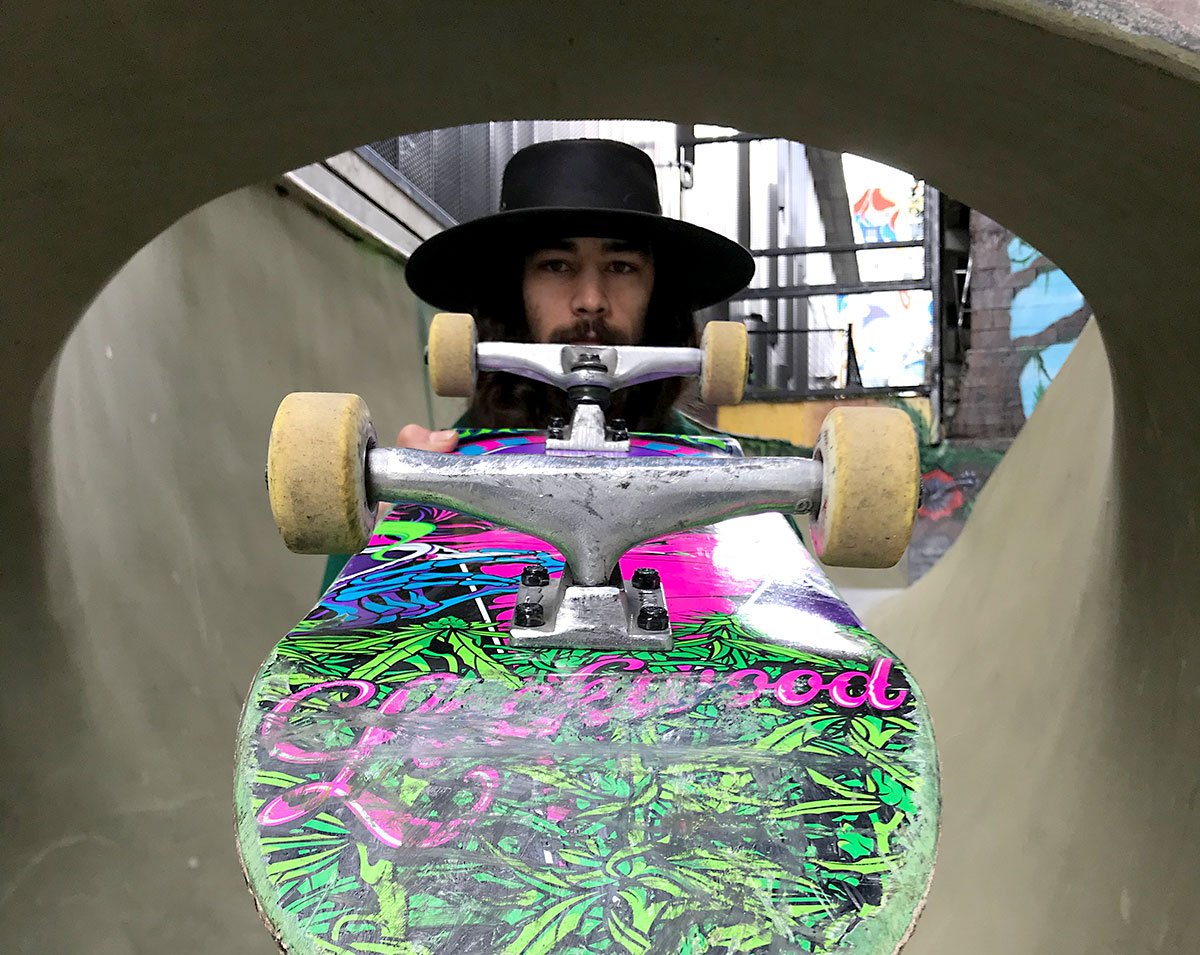 What size and style trucks do you ride?

I keep it OG base plate and hanger, no hollow anything just solid steel and aluminum baby! 149 Team Editions!

I know you recently recovered from a pretty bad knee injury – how was the recovery process? Anything that really helped you get through the time off the board?

Yeah, about a year and a half ago, I tore the shit out of my ACL and meniscus, had a hinge lock and couldn't bend my knee for over two months. A year ago I had surgery on it. The recovery was one of the most difficult things I've ever had to deal with mentally and physically. I have a massive amount of respect for anyone who has come back from a huge injury. Really what helped the most during the time off the board was having the continued support of my sponsors and having my friends, family, and dog to help keep my mind strong while my body was healing.

Anything planned or in the works for 2020, we should keep an eye out for?

2020 is off to a weird start with this virus and such, but if the world doesn't end, I will have a part in an upcoming Creature project, some clips to accompany this interview, and hopefully, some more goodies to drop for Thunder in the future. Cheers to 10 more years!