Charles Deschamps covers it all, flipping bump to bars, smooth lines, and a double kinked hubba ender to close things out for the newest Thunder Knows video. 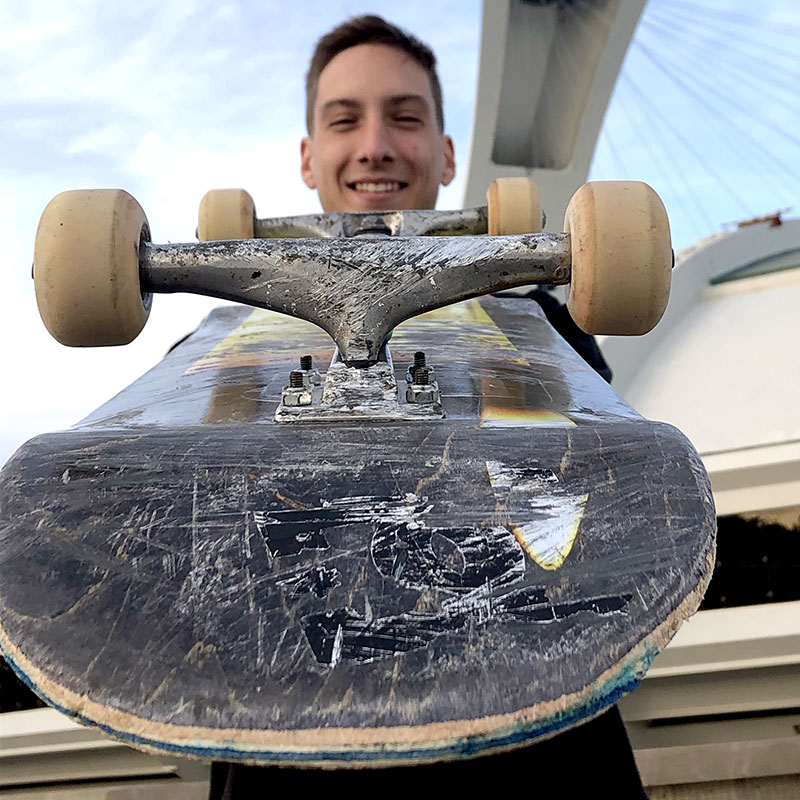 What’s up Charles, how’s it going?

Not much just got back from Boston with Hotel Blue, trying to take advantage of those last few weeks before winter.

Let’s start with the basics how old are you where are you from?

I’m 28, and I’m from St. Hubert, South Shore of Montreal, but I live in Montreal now.

You guys have some harsh winters up in Montreal. What was it like growing up skating there?

Yeah, winters are harsh and long here, not always easy for skateboarding, but I think it’s a good time to travel and visit new places. It almost forces you to travel and be productive. It was pretty good. I grew up with South Park/ Spin Skatepark, an indoor skatepark close to my house, so it wasn’t a big problem for me. My dad would drive me and some friends every other day. I also use to snowboard a lot, so that made the winter pass by somehow pretty quick.

Were there any older rippers/pros around you growing up you looked up too?

We always had a really active scene in Montreal, I grew up watching old underworld videos with Carl Labelle and other pros. But I really got into street skating because Lebeau’s video All Night Long and Lazy Paparazzi. A bunch of local rippers skating local spots. Once we start finding the spots we saw in the video, it really got me juiced to go.

I know you were in South Korea recently, how was that? Seems like there are some pretty amazing spots there.

Yes, South Korea was unreal. We got to meet so many good people, and we had an amazing time out there. The weather wasn’t the best while we were out there, so we didn’t see as many spots as I would have liked to. Some of the spots are incredible though. I’m hyped I got to visit. Besides the Korea trip, it seems like you travel quite a bit – what’s your favorite place you’ve visited so far?

For skating? I would say Europe in general, Spain and Portugal are my favorite places to go during the winter. Weather is nice, and it’s pretty easy to get around. Good spots, cheap food, and of course no snow.

If you could live anywhere in the world, where would it be?

No place like home, Montreal – But if I had to move? Probably somewhere in Europe, like Paris or something.

How did you get involved with Thunder?

I think it all started with Eric at Spin, who put out a good word to the local rep, it didn’t take too long until I started getting trucks from the Canadian distributor. Later on, got introduced to some of you guys, and now we’re here!

What’s your daily routine like, do you have a job or just skating?

I don’t really have a routine. Every day/ weeks are different. Traveling, skating, working make my days pretty interesting. I try to skate as much as possible, but I’m also working on several projects at the same time. I studied architecture in college and got a job in an architecture firm like 5 years ago, but I didn’t like it as much as I would expect. It would take most of my day’s time, and I wasn’t really juiced to go to work in the morning. I mean drawing toilets and shit like that isn’t really interesting for a skater. So I quit and decided to try to work on skatepark related stuff.
Ever since I have been self-employed and getting jobs related to skateboarding. Lately, I have been more focused on skatepark plans on AutoCad and 3D design for new parks in Montreal. All the meetings and stuff have been keeping me busy, but it’s really rewarding to see that all the hard work pays off.
Skating, traveling, and working have been taking a lot of my time, but I wouldn’t change it for anything. Stoked to be able to do it all.

Are you working on any other video projects right now? Anything we should look out for?

Hotel Blue is dropping a video next month, so we just went to Boston to get some stuff. Shit’s gonna be sick. Also, DC is working on a few video projects for next year, so I’m definitely gonna focus on that.

Any shout outs or thank yous?

So many; My parents, Jimmy, John, and everyone at DC who works hard every day to make things happen. Nick at Hotel Blue for keeping it real. Everyone at Thunder and Spitfire. Phil and many more at Empire. Eric and Jake for filming me for hours. Lebel for taking the best photos. And all my friends that have been supporting me!